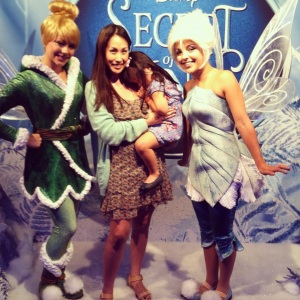 Secrets of the Wings!!!

Saturday mornings, I take O out until her daddy gets back from the desert. It just kills time and she doesn’t sit in front of the TV all morning. We met up with Maya and her Daddy for breakfast at the Farmer’s Market because O was obsessed with seeing Maya. Strangely, this playdate didn’t turn out as well as the fun night at Giggles and Hugs. They were actually pretty mean to each other and didn’t play well. Ahahahahaha. But when they had to say their goodbyes… of course then… they wanted to play. The irony.

When her dad arrived, we just chilled until we met up for dinner with two of our married (no kids) couple friends. Afterwards, we came back and had a Wii-off. Some funny memories were made as my girlfriend (Jesse) accidently let out a nice, audible fart as she played tennis. Yep, that’s how intense we are when we play!!! I still am cracking up as I think back to the night. Good laughs are so healthy for your mind and body. I need more of those. I’m sure O was thinking, “why are these old people playing games… while I’m just sitting here watching!!!” ahahahaha.

Sunday, O and I had a date at the El Capitan again. We watched “Secrets of the Wings” with Tinkerbell and Periwinkle. I loved the movie and so did O. But I think I loved it more than her. The characters were so pretty. Haha. We went to the Pixie Party after. I have to say I was disappointed. The food was atrocious and literally just Costco appetizers put together. I don’t know how the breakfast parties are but the afternoon party … you can skip and either go to the Disney Diner or other places in Kodak Theater or nearby.

That’s the picture O took. I was sad. Ahahahahaha. But what can you do? You can never predict how a kid is going to respond. But later, after some arts and crafts… she mustered up the courage to go up to them and show them her drawing and give each of them a hug. I think she WANTED to give Tinkerbell a hug but was a bit tentative to give Periwinkle one. Ahahahahaha. But I forced her to give Periwinkle one… because my sensitive arse didn’t want Periwinkle’s feelings to be hurt. I swear, I need to work on not feeling bad about things like that.

Funny, that I mention that, because my husband was saying the same thing. He’s like “you are so cutthroat and firm about most things… but when it comes to having to hurt someone’s feelings… you can’t.” For instance, my doctor from the burbs wanted to deliver O because he knew all my hardships in getting pregnant… but it was an hour away… yet, I couldn’t say no. So I kept him. And it turns out… I didn’t like him much in the first place. But because I’m a creature of habit and I tend to feel disloyal… I stayed with him. 😦

I’m going to start seeing a specialist again to see if there is anything I can do to try to improve our chances at baby #2. Again, I wanted to stick to my old ReproEndo… out of loyalty, familiarity, and comfort… but I think I might search for someone new… my husband says I don’t need to feel guilty. It’s definitely my own abandonment issues that creep into such mundane aspects of my life… I’m aware. It’s just hard for me because I feel like I’m abandoning them and being disloyal. But in this case, time is not on my side and I understand a new perspective from fresh eyes can be beneficial. So, I’m going to make an appointment to see what can be done. I’m hoping the stork visits us this month so we don’t have to resort to seeking help.