On Fridays at the Hollywood Bowl, they have Summer Sounds.  This week it was Filipino Music perform by Dulce something or other.  Before the shows they have a Fine Arts time where kids can go and either make necklaces, do art, or make clay fishes.  I’m sure there were a few other choices but those are the ones I saw.

O decided to the clay fish making.  She was actually pretty good.

Her end creation… she’s very strategic in her placement of scales. And it all had to be the same shape. OCD.

She loved the craft time.  They give you an hour or so to make crafts.  It was a great day too weather wise because it was cool and almost even chilly.  Crazy July weather.  But great for me.  It wasn’t overly crowded either.  And parking was ample, close to the areas we were going to… and best of all… FREE.  I was so surprised as nothing in LA is ever free, especially parking.  Whoohoot. 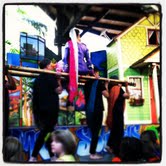 The performance…I can’t say I absolutely loved it.  Most of the kids were crying because it was too loud… and even a bit scary.  My unnie (older sister) I went with said it was her least favorite of all the Summer Sounds she went to.  😦  I have nothing to compare it to so I can’t say.  But yes, the people in the show were not so appeasing to look at.  The men who played parts in the show were rather out-of-shape (yes, round and flabby are shapes I suppose… and hairy can be looked upon as fabulous decor… but it wasn’t pleasing to my visual senses… at all!!!!!!!!).  So mean, I know.  But kids were crying… !!!  A friend that went with us had to leave with her two girls because the older one (4 years old) was either scared from the loudness of the show or the not so pleasant looking crocodiles and monkey.  Haha.  I mean really… the costumes were atrocious.

Literally felt like I had to shield O’s eyes from the horror and possibility of having a “BALLS IN YO FACE” experience.  One not-to-fit, tights wearing crocodile’s pants were see-through when he would bend over… I was like “oh sh!t, nooooooo… I can nearly see his package!!!”  I was like, “Good God, please let him be wearing some underwear!!!”  Even had to tell Unnie… “wtfreakzilla… his pants are too thin!!!”  Swaying ball sacks at a kid’s event… is a big NO!!!  Let’s save that for Magic Mike.  I also was not impressed with the amount of man-boobs on display.  I swear, O was probably thinking… “he needs a bra.”  I really felt the dress (or lack thereof… ) was inappropriate to say the least.  Flying tata’s… a NEVER unless you are at a cabaret show in Vegas.  JUST SAY NO.

(Oh, and one of the usher girl’s fly was down on her pants.  If you guys can’t tell by now…I notice EVERYTHING!!!  I’m the person you never want to go to the movies with, because in the climax of a movie where people are going into battle and fighting for honor of the beloved… I will notice something obscure and meaningless … like a horse running away… and be like “oh shoot, the horse ran away.”  My BFF from college was always unamused… her response went something to the effect of “Ok, Captain Obvious!” I think she was being sarcastic.  Ahahahaha.  Jk.  Thanks Suj).

Anyhoot, I wonder if O was traumatized by this experience in anyway?  She seemed to actually enjoy the show.  Haha.  Then, the lead lady was like… “hey, we are in Historic Filipino town… come down and I will make adobo for you!!!”  So, now I know where not to go… although I love me some adodo.  I just thought to myself (again internal dialogue…) “avoid the 2 FWY and Silverlake area at all costs.”  Hahaha.  Just kidding.  It was a good show… if man tatas and see through pants are your thang.

What I liked.  The bathroom was close to the little Amphitheater.  And it was clean.  You know how I feel about public restrooms, so that was a win.  And we didn’t have to walk all the way up to the main Hollywood Bowl theater.  Whew.  But I think it was a good experience for O… even with the close call.  Something new.  And not the Grove.  🙂 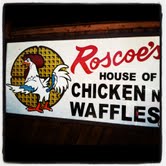 I will still say “overrated.” Sorry Sherry and Anita!!! Agree to disagree!!! It’s not bad or anything… but I just don’t get the hype.

Afterwards, we went to Roscoe’s Chicken & Waffle.  I love the vibe there.  You see people from all over the world go there.  But truthfully, I feel the food is overrated.  I love me some comfort food, but I don’t think it’s anything I can’t get anywhere else.  There was much debate on my Facebook wall.  Yes, people were even disappointed with me.  Hahahaha.  So we agreed to disagree.  I’m not a foodie.  I never claim to be.  I just like to eat.  But I know what tastes good to me and what doesn’t.  It’s not that Roscoe’s isn’t good… I just think the hype is not what it’s meant to be.  When I first tried it in highschool, it was good… but I never craved it or felt I NEEDED to go back.  Unlike Mario’s Peruvian restaurant… oh man, why did I even think of it.  Now I want the soup.  Yummy.

Anyways… we are off to our next new experience at the San Diego Zoo.  Hope everyone is having a great weekend.