Last week, I invested in eye primer, because I noticed my sister’s eye makeup looked radiant.  When I asked her what eye shadow she was using, her sarcastic remark was “it’s eye primer dumbass!!!”  So I invested in the one she was using which is Urban Decay’s Eye Primer Potion in Brightening for only $19.  You only use a tiny bit so it should last a little while.  It dries sticky but doesn’t make your make-up hard to put on.  They have many, many different ones, but that’s the one I’m using.  Initially I didn’t like it because I put the primer on before my tinted moisturizer.  FAIL.  So my makeup didn’t go on that well.  But I tried it a second time and loved it.  I worked out and my eye makeup was still in place and not all over my face.  I sweat a lot so that’s a huge bonus to putting on this eye primer.  Here’s what it looks like: 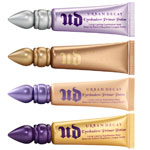 It's the brightening one in the tube!!!

Anyhow, I also started using the Ojon dry shampoo.  It works but the smell is not up my alley.  It reminds me of Chinese herbal drinks from my childhood.  Not so pleasant but the smell seems to wear off relatively quickly.  The drawback to using the aerosol can is that it’s not environmentally friendly and it seems to leak after using which makes it seem like I’m wasting way more than I use.  It costs $24 which I think is a bit pricey but I’m trying to wash my hair every other day because my hair is falling out a lot.  It hasn’t stopped since after the pregnancy.  My mom has thin hair so I must preserve preserve perserve.  Thanks again MOM.  Great genes.  Ahahaha.  Jk.  Love her.

I think I will try Oscar Blandi’s next.  The smell was much better, cost a dollar less, but was smaller in size.

Today, Husb, O, and I went to California Adventure.  The Little Mermaid ride took forever to get on and was a bit disappointing.  The ride was short and there really wasn’t anything spectacular to look at.  O still doesn’t seem to appreciate amusement parks much.  She cried every time we went on a ride.  All she kept saying during our night ritual of going over what the day was like was “I was scared.”  Ahahahhah. FAIL.

On a side note, the other night, I was cleaning up outside and Husb was helping O get ready for bed.  He asked her to get something for him and her response was … “why should I?”  We were both dying.  I seriously can not believe some of the things that come out of this little creatures mouth these days.  She’s so sassy.

Yesterday, O and I had a playdate with my friend, Maria, and her kids at our local park.  The weather was amazing and it was nice just sitting and being out with someone my own age.  Well and of course O, since she feels she’s an adult and would rather play with us than the other kids at the park.  I sometimes wonder if she’s ever going to venture out on her own.  I know other mom’s think she’s super clingy to me and before her clinginess would drive me crazy.  But after what Dr. Longhurst told me… I kinda appreciate that she’s so addicted to me right now because I know it’s not going to last forever.  One day, she’s going to be secretly be giving me the bird behind my back as I’m scolding her.  AHAHAHAH.

Anyways, good night. I’m super tired because not only did I go to California Adventure, I went to dinner with my sis to TAKAMI in downtown LA.  Food was decent, view was spectacular, service was a so so.  Nitey nite my little chicken caboodles.